To share your memory on the wall of Bill Morris, sign in using one of the following options:

Print
Billy F Morris passed away on Monday May 31st at the age of 63. He was born in Albuquerque, NM on October 10, 1957 to James C Morris and Doris L Morris (Moseley). He attended Highland High School where he played football.

Upon graduatio... Read More
Billy F Morris passed away on Monday May 31st at the age of 63. He was born in Albuquerque, NM on October 10, 1957 to James C Morris and Doris L Morris (Moseley). He attended Highland High School where he played football.

Upon graduation Billy joined the IBEW as an apprentice, after 43 years as an active member he retired at the age of 62 from the 8th district. Some of his many jobs included UNM Children’s hospital, New Mile High Stadium, Denver Airport, and multiple water treatment plants in the Denver area. Billy considered Colorado home but the job gave him the opportunity to travel the country working in New York, California, New Mexico, Nevada, and Kansas. He made lifelong friendships along the way.

On July 16th 1983 he married the love of his life, Teri Smith of Lyndon, Kansas, they had two children. Together they traveled, enjoyed horseback riding in the mountains and attending the Telluride bluegrass festival (before it became a big deal). When they danced the whole room watched. She preceded him in death in 2002.

Billy was an avid hunter and enjoyed being in the mountains, he built two homes in Glen Haven and Drake. His time in California gave him a love for the ocean and red wood trees. Billy never met a stranger and was always willing to help a friend in need.

Billy is survived by his three children Marci, Erin (Eric), and Joseph, as well as three grandchildren Sarah, Gunnar, and Everleigh. He will be missed by those who knew and loved him. His ashes will be buried next to his wife and a graveside service will be held on July 16th at Highland cemetery in Scranton, KS.
Read Less

To send flowers to the family or plant a tree in memory of Bill Frank Morris, please visit our Heartfelt Sympathies Store.

There are no events scheduled. You can still show your support by sending flowers directly to the family, or planting a memorial tree in memory of Bill Frank Morris.
Visit the Heartfelt Sympathies Store

We encourage you to share your most beloved memories of Bill here, so that the family and other loved ones can always see it. You can upload cherished photographs, or share your favorite stories, and can even comment on those shared by others. 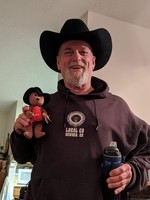