To share your memory on the wall of Dale McCue, sign in using one of the following options:

Print
Dale Elwood McCue, passed away peacefully from complications of heart disease on May 4, 2021, at his home with family by his side.

Dale was born October 6, 1931, to Paul and Vera McCue in Gering, NE. He attended schools in the area and w... Read More
Dale Elwood McCue, passed away peacefully from complications of heart disease on May 4, 2021, at his home with family by his side.

Dale was born October 6, 1931, to Paul and Vera McCue in Gering, NE. He attended schools in the area and worked in the sugar beet fields on the family farm. He enlisted in the US Army and served honorably during the Korean War. In 2016, he was awarded the “Ambassador for Peace” medal at a Salute to our Korean War Veterans ceremony at the Veterans Plaza of Northern Colorado. Dale Married Connie L. Mitchell, June 6, 1952, in Crawford, NE. 5 children were born to their marriage, Deborah, Marcia, Bradley, Yvonne, Christine. While living in San Diego, Idaho and Colorado, the family enjoyed water skiing and many outdoor activities. They divorced September 17, 1980.

Dale received an associate degree in electronics from Central Technical Institute in Kansas City, MO in 1956. His degree launched a career as a systems engineer with General Dynamics in San Diego, CA on the Atlas Missel project. He then moved to General Atomics Technologies supervising 8 engineersin the design and construction of a protection system for a nuclear fuel plant. That experience led to a position with PSC as one of 3 Technical Advisors at the Fort St. Vrain HTGR in Platteville, CO. Dale also held the positions of Project Scheduler for Public Service Company of Colorado for the Southwest Corridor of the Regional Transportation District Light Rail Project, Electrical and Gas Construction Crew of PSCO Lipan Distribution Center, New Product Development Dept of New Century Energies, Inc., Kewaunee Nuclear Power Plant, Duane Arnold Energy Center and Yankee Rowe Nuclear Power Plant Demolition. He was honored to be chosen as a staff engineer consultant at the nuclear power plant in Schemhousen, Germany.

Dale married Beverly J, Lemmon Alldredge on May 30, 1981. Bev & Dale enjoyed hosting friends for gourmet dinners as well as family get-togethers. Their home was already tastefully decorated with a variety of art work and seasonal décor.

After retirement from his engineering career, Bev and Dale opened their home to a bed and breakfast business for HP engineers and artists attending the Loveland Fine Arts Academy and annual Sculpture Show. The inn was awarded in the top 3 in the small inn category of the Colorado Bed & Breakfast Assoc. of Colorado. A treasured memory of their many travels was a trip to Israel with their church. Dale always looked forward to elk hunting season, enjoyed friendships with his hunting buddies and former co-workers. Dale was a member, served on the security team and the board of REZ Church. He was a member of the American Legion.

The family would like to thank the UCHealth medical staff, VA, Seniors Helping Seniors, Compassus Hospice for excellent care they gave to Dale.

In lieu of flowers, memorial contributions can be made to local American Legion, Samaritan’s Purse, or Wounded Warriors.
Read Less

To send flowers to the family or plant a tree in memory of Dale Elwood McCue, please visit our Heartfelt Sympathies Store.

There are no events scheduled. You can still show your support by sending flowers directly to the family, or planting a memorial tree in memory of Dale Elwood McCue.
Visit the Heartfelt Sympathies Store

We encourage you to share your most beloved memories of Dale here, so that the family and other loved ones can always see it. You can upload cherished photographs, or share your favorite stories, and can even comment on those shared by others.

Posted May 20, 2021 at 03:50pm
I was so very fond of Dale. Whenever I saw him at church , he always had a huge smile and hug for me. I love him and Bev so much. Bev, I am praying for you and your family as I just found out about Dale’s passing this morning. Love you very much......Diane Blanco
Comment Share
Share via:
JC 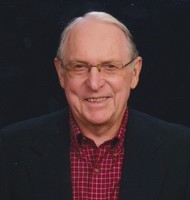