To share your memory on the wall of Dora Morgan, sign in using one of the following options:

Print
Dora “Pat” Jane Buttars Morgan passed away peacefully on February 20, 2021. She was born January 22, 1926. She was finally reunited with her husband and son. She has been waiting for this wonderful reunion for several years.

She marr... Read More
Dora “Pat” Jane Buttars Morgan passed away peacefully on February 20, 2021. She was born January 22, 1926. She was finally reunited with her husband and son. She has been waiting for this wonderful reunion for several years.

She married Cecil P Morgan on December 16, 1942. With Cecil she adopted the name “Pat”, most friends and family know her as Pat.

Pat and Cecil lived in several places which included Pasco Washington, Ogden Utah, San Jose California, Bloomington Utah, and many years after Cecil’s passing she moved to Loveland Colorado to be closer to family.

She was known for her “Famous Morgan Pit Stop” which meant when she came to visit you, she would start to get ready to leave within 15 minutes of her arrival. She never wanted to overstay her welcome. This was not to be done when you visited her however, there she would always welcome you with open arms, and a home cooked meal.

She had an incredible love for her family, friends and church. She would always ask about the status of family members and would repeatedly send her love to them.

She is preceded in death by her parents, Robert T and Emily Maude Buttars, Sisters Uella (Faye) and Phyllis, her brother Lyle and son Steven C Morgan.

The family would like to express sincere thank you to those who helped care for her at the Good Samaritan Assisted Living Center in Loveland Colorado where she passed away.
She will be laid to rest next to Cecil in Los Gatos at Los Gatos Memorial Cemetery in San Jose, California.
Read Less

To send flowers to the family or plant a tree in memory of Dora Jane Morgan, please visit our Heartfelt Sympathies Store.

There are no events scheduled. You can still show your support by sending flowers directly to the family, or planting a memorial tree in memory of Dora Jane Morgan.
Visit the Heartfelt Sympathies Store

We encourage you to share your most beloved memories of Dora here, so that the family and other loved ones can always see it. You can upload cherished photographs, or share your favorite stories, and can even comment on those shared by others. 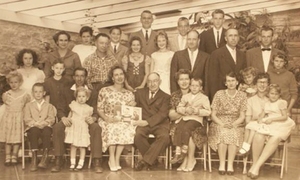