To share your memory on the wall of Judith Goggin, sign in using one of the following options:

Print
Judith Kay Goggin passed away April 15, 2021. Surrounded by her loving family at home in Loveland, Colorado at the age of 75. She was born in Denver, Colorado to Edward and Dolores Jacobs.

Judy married John Goggin on August 27, 1964. The... Read More
Judith Kay Goggin passed away April 15, 2021. Surrounded by her loving family at home in Loveland, Colorado at the age of 75. She was born in Denver, Colorado to Edward and Dolores Jacobs.

Judy married John Goggin on August 27, 1964. They began their life and family together In the Denver area. They decided to move to Northern Colorado in 1972 with their four children. Judy worked for Safeway for 30 years and retired in 2005. Judy and John enjoyed their family, camping, traveling and having special times together, the two were inseparable.

Prayer services will be held at Viegut Funeral Home on Thursday, April 22, 2021 at 1:30pm with a reception in the Viegut Reception Center following services. Private inurnment will be held at Fort Logan National Cemetery in Denver this summer.
Read Less

To send flowers to the family or plant a tree in memory of Judith Kay Goggin, please visit our Heartfelt Sympathies Store.

We encourage you to share your most beloved memories of Judith here, so that the family and other loved ones can always see it. You can upload cherished photographs, or share your favorite stories, and can even comment on those shared by others. 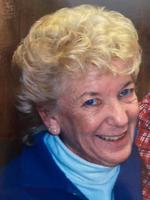