To share your memory on the wall of Roy Hervey, sign in using one of the following options:

Roy graduated LHS in 1948 and was offered a boxing scholarship to DU but enlisted in the U.S. Navy to serve his country, stationed in San Diego. He proudly wore his “bottom-gunner” hat honoring his service in the submarine corp.
He married Barbara Hester in 1950 having 4 children. Happy times were spent camping in the mountains and desert, volunteering much of his time as a boy scout leader, coaching baseball, and softball teams, and being a deacon at the church. Roy was a pioneer in the early days of drag racing, building hot rods and running them on the Bonneville Salt Flats.

Roy was a skilled building contractor in San Diego and Longmont until age and health forced his retirement. He married his high school sweetheart, Ramona Adamson Cushman in 1987. Many happy holidays were spent at their Bowen Street home where he was a welcoming host and master bar-b-que king. They moved to Alliance, Nebraska for some years with family and made many lasting friendships. Roy especially loved the spring brandings.

They moved home to Longmont the Christmas of 2017, renewing old acquaintances with LHS classmates, and making friends at Aspen Meadows their new home.

Roy is survived by his wife of 33 years, Ramona and her three daughters, Patricia Turner, Cathy Intermill and Sondra Hopkins and their AFS daughter, Argerie White. Roy is survived by his children Robin Harang, Randy Hervey, Rusty Hervey, and Ricki Aquino as well as many grand and great grandchildren, and his sister, Shirley Richendifer Sides.

He was proceeded in death by brothers Bill and Bob and sister Betty Leonard.

Roy never met a stranger and was a model to all of us for his kind nature, grace, and humility.
Read Less

To send flowers to the family or plant a tree in memory of Roy Albert Hervey, please visit our Heartfelt Sympathies Store.

There are no events scheduled. You can still show your support by sending flowers directly to the family, or planting a memorial tree in memory of Roy Albert Hervey.
Visit the Heartfelt Sympathies Store

We encourage you to share your most beloved memories of Roy here, so that the family and other loved ones can always see it. You can upload cherished photographs, or share your favorite stories, and can even comment on those shared by others.

Posted May 14, 2021 at 08:43pm
Roy was one of the first people I met when Charlie and I moved in to Spring Creek. He was welcoming, friendly, just a bit sassy, and a joy to know. He and Ramona are in our thoughts. Bless you, Ramona.
Kathy and Charlie Newens
Comment Share
Share via: 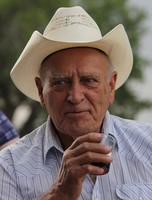