To share your memory on the wall of Steven Schrader, sign in using one of the following options:

Steve was born in Loveland, CO on November 6, 1970. He graduated from Thompson Valley High School in 1989. He met his future wife, who graduated with him, from the same high school and 25 years later he admitted he had a crush on her. On August 23, 2015 he married Becki Conway-Nichols of Loveland, CO. Steve worked for HP, Kodak and FRC Electronics before working for 16 years as a nighttime merchandiser at Sam’s Club in Loveland, CO.

Steve loved the outdoors. He loved to spend his time off fishing, going for walks or just sitting on the front porch watching people walk by. He also enjoyed rebuilding his three wheelers and he spent a lot of time playing with all of his dogs.

Steve was taken way too young from us but in his 50 years here, he had touched so many lives. His absence will be felt far and wide and he will be missed deeply.

In lieu of flowers, the family is asking for donations to be made to the GoFundMe account at: https://gofund.me/6ed8e72f
Read Less

To send flowers to the family or plant a tree in memory of Steven Michael Schrader, please visit our Heartfelt Sympathies Store.

We encourage you to share your most beloved memories of Steven here, so that the family and other loved ones can always see it. You can upload cherished photographs, or share your favorite stories, and can even comment on those shared by others.

Posted Apr 28, 2021 at 12:46pm
Jim and Bill the Garcia family is sorry for your loss. May he rest in peace and keep those good memories in your heart.
He is with your mom and dad. Pearl Garcia Davenport.
Comment Share
Share via:

Posted Apr 24, 2021 at 09:41am
Steve you are my little brother that I watched grow up we always had each other's back I look back on our fishing trips with Lyle riding our bikes all over . You were a true fighter that has left us all to soon . May you rest in heaven with mom and dad and all of the family in heaven . I miss you everyday I look at my phone and our last conversation we had . I love and miss you . Jim
Comment Share
Share via:
BS

Posted Apr 23, 2021 at 02:32pm
Stevie, you fought a long and hard battle. You faxed down more things than any one person your age should ever deal with. I know that you are in a better place and are feeling healthy again. Rest in peace little bro.
Bill
Comment Share
Share via: 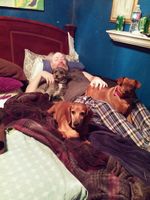