To share your memory on the wall of Vernon Thorson, sign in using one of the following options:

Vern was born on 22 of July, 1928 in a farmhouse near Story City, Iowa to Maybelle and Weir S. Thorson. He was a graduate of Story City High School in 1946 an... Read More
Vernon Lowell Thorson, passed on April 30, 2021 at Denver Hospice, Denver,CO.

Vern was born on 22 of July, 1928 in a farmhouse near Story City, Iowa to Maybelle and Weir S. Thorson. He was a graduate of Story City High School in 1946 and he served in the US Navy in the World War II from 1946-1948. He received a BA from Iowa State University in 1952. On May 4, 1950, he married Delores R. Pomeroy. They were married at the historic “Little Brown Church” in Nashua, Iowa, made famous by the song, The Church in the Wildwood.

Vern had a successful career with Farmland Industries as a salesman and later 17 years as a regional manager of agricultural sales.

Vern was a devoted father and grandfather. He loved spending time with his 7 grandchildren and 7 great-grand children. He enjoyed playing golf and keeping up with Rockies baseball games. He was passionate about serving as a committee member and president of the Lion’s Club for 25 years, and was heavily involved in fund raising for the disadvantaged and underprivileged in the local community. Vernon organized and launched the first charity golf tournament for the Lion’s Club, which became an annual tradition.

Vern was preceded in death by his son, John, brother, Joel and two sisters, Marjorie Johnson and Judy Knoche. He is survived by his wife Delores, 2 daughters, Sherri Wargin & Paula Fletcher and two sons, Dwight Thorson and Tim Thorson.

A memorial service to honor Vernon’s life will be held this Saturday, May 8, 2021 at Viegut Funeral Home in Loveland, CO at 10:00 AM.
Read Less

To send flowers to the family or plant a tree in memory of Vernon Lowell Thorson, please visit our Heartfelt Sympathies Store.

We encourage you to share your most beloved memories of Vernon here, so that the family and other loved ones can always see it. You can upload cherished photographs, or share your favorite stories, and can even comment on those shared by others.

Posted May 05, 2021 at 07:07pm
With deepest sympathy from your friends a Nancys Express

Flowers were purchased and a memorial tree planted for the family of Vernon Thorson. Send Flowers

Flowers were purchased for the family of Vernon Thorson. Send Flowers 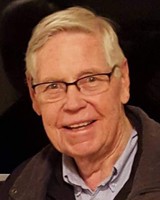